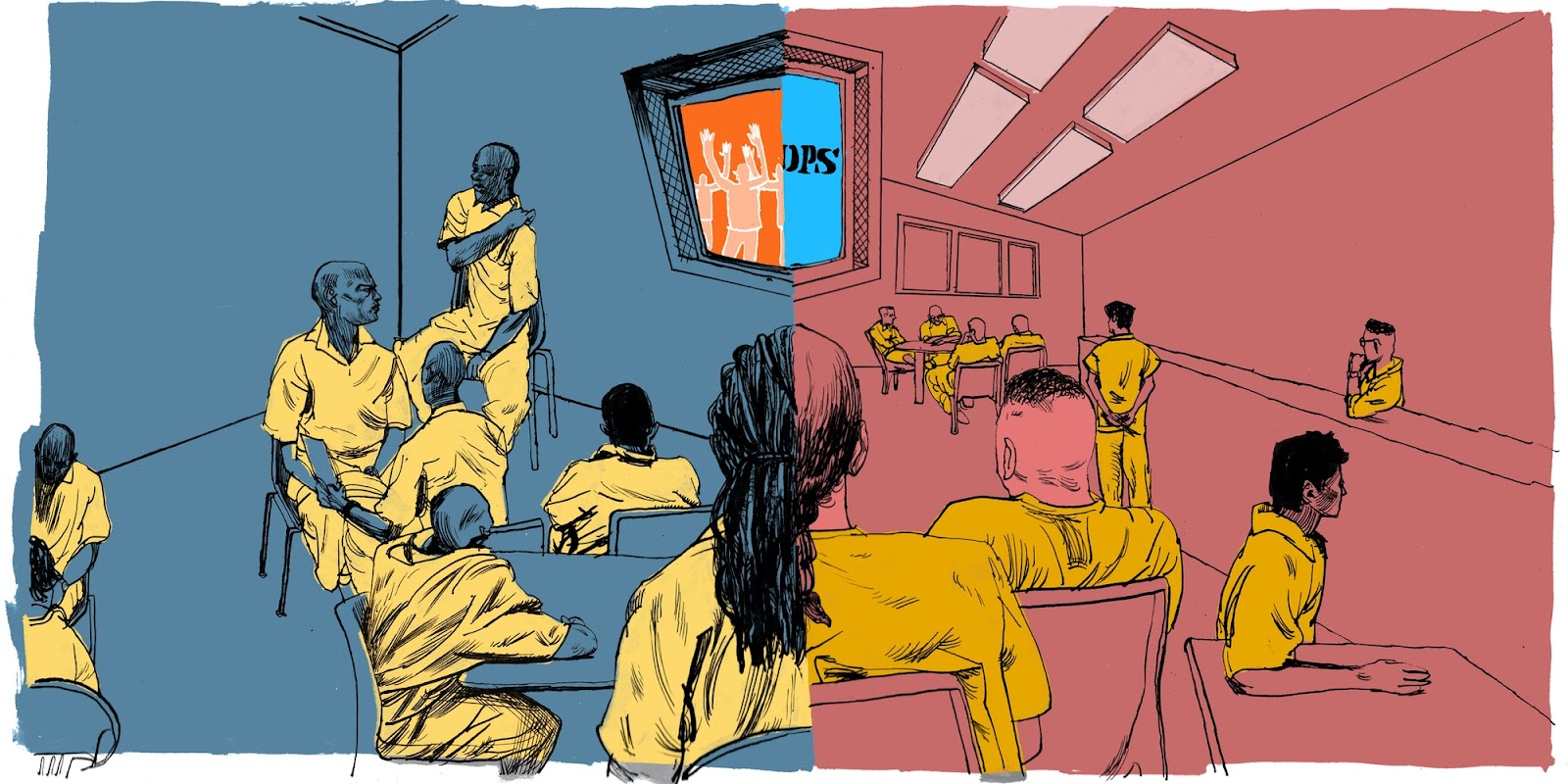 by: Kate Kasica
While watching The Work, directed by Jairus McLeary, I was struck by how the environment created within the documentary seemed completely separate from any external pressures or norms. There are no physical or socially constructed divides, allowing inmates and visitors to form meaningful connections with one another. This support system also crosses racial divisions, and while race is not the focus of the documentary, it’s impossible to ignore the opposing gang affiliations present within the diverse group of inmates. The introduction to Dark Cloud as a member of the Skins, a Native American prison gang struck me. As well as Kiki, who is similarly introduced as a member of the Others, which is a Pacific Islander and Asian prison gang. To me it seemed odd to define these characters through their race affiliations, because the documentary makes no other mention of race. I discovered that the environment created within The Work, that is fundamental for the healing, is far from the reality of prison.

Arthur Longworth, a contributing author for Prison Writers, explains that inmates live within the confines of an imperious racial divide. From segregated TV rooms to racially assigned shower heads, it seems as though prisons are stuck in the Jim Crow era. Longhworth depicts extreme isolation and separation between all races. Strict divides come with strict rules, and a violation of these rules has brutal consequences for all involved.

For us, in the words of Longworth, free world people this may seem reason to criticize the inmates, but it is important to understand that this segregation is a result of institutionalized racism. Before the Civil Rights Act of 1964 prison wardens segregated cell blocks according to race, post Civil Rights Act prisons were required to integrate all aspects of their facilities. But Longworth explains that in prisons today the main area of separation is cell assignments, meaning that cells and cell blocks are assigned based on race. This racial discrimination is no longer controlled by the warden, but instead demanded by priosoners. Surprisingly, Longworth does not oppose this obviously racist structure, writing that he “won’t live with a prisoner of another race.” This is reason to quickly label him as racist, and Longworth even acknowledges this may qualify for “free world racism.” But he has no hatred towards another race and no feelings of superiority over any other race.

Free world racism to us is just racism and we don’t see racism as different simply because it happens within a prison. But Longworth distinguishes free world racism from the segregation that occurs, justifying the racial divisions as a “necessary” and “inherent past of the institution.” Whether or not this segregation is necessary or beneficial within the prison industrial complex is detable, but through programs like those within The Work we see inmates transcending the racial boundaries. Longworth also notes this possible connection that comes from the “common ground of humanity.” Racial tensions within prisons are amplified and potentially deadly but when inmates are able to unite for a cause that surpasses the racial divisions a better environment emerges.

One thought on “Social Structure within Prisons: The Realities of Racial Relations ”